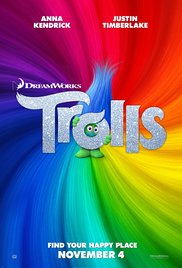 Not recommended under 5, parental guidance recommended 5 to 8 due to violence and scary scenes.

This animated movie is set in a magical, colourful paradise where a community of trolls live a fun-filled existence filled with hugs, dancing, singing, scrapbooking, and even glitter-farts. They are ruled by the eternally optimistic and gorgeous Princess Poppy (voice of Anna Kendrick) who loves to keep everyone happy.

One day, Princess Poppy throws a party so spectacular and so loud that it is spotted in the distance by a 'Bergen'. Bergens are horrid, depressed, monsters that have decided that they can only become happy by devouring trolls. This particular Bergen, the exiled head chef (voice of Christine Baranski), knows that she can win favour with the young Bergen King  'Gristle' (voice of Christopher Mintz-Plasse) by bringing him some tasty trolls to eat. She gate crashes the troll party and kidnaps a handful of the tiny creatures.

Princess Poppy is completely shocked but knows that she must rescue her captured subjects before they are eaten. She enlists the help of Branch (voice of Justin Timberlake) who is the only grumpy and pessimistic troll in the bunch. Poppy convinces him to team up with her to travel to the Bergen town and save the kidnapped trolls. Along the way, despite the peril, many lessons are learnt and many cheerful songs are sung.

Community; love and kindness; kidnapping; creatures being killed and eaten

There are a few scenes of animated violence in this movie including:

Children of this age may also find some of the above scenes scary or disturbing and parental guidance is recommended.

There are some mild sexual and romantic references in this movie, including:

There is some nudity and crude body-function humour in this film, including:

There are some mild insults in this film, including:

Trolls is a fantastic and lively spectacular. It is full of funny, loveable characters and some entertaining music and dance scenes. It is humorous, well-paced and full of good messages. With trolls being chased and eaten and scary creatures such as the Bergens and large spiders, the film may be too scary for under-fives, but otherwise can be enjoyed by both a range of children and their parents/carers.

Parents may wish to discuss whether you should feel that you need to change your appearance to be attractive to someone to whom you are attracted.