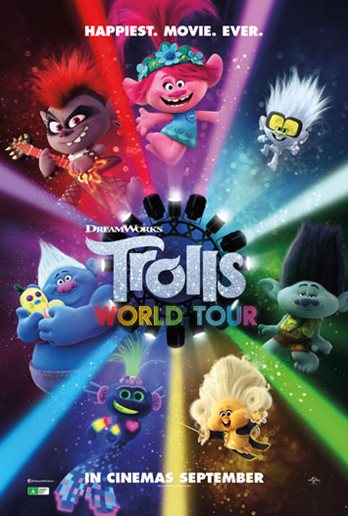 Not suitable under 5; parental guidance to 7 (mild scary scenes and violence)

Trolls World Tour is a sequel to the 2016 film Trolls and takes us right back into that psychedelic, happy land where Queen Poppy (voice of Anna Kendrick) rules over a groovy bunch of Pop-Music Trolls who like to do nothing more than sing and dance all day. One day a message arrives for Poppy, it’s from a faraway ruler from another tribe of Trolls: Barb, Queen of the Hard-Rock Trolls (voice of Rachel Bloom). Poppy is so excited to hear that there is another tribe of Trolls living beyond the boundaries of their forest, even more so when her father tells her that there are many, many different tribes of Trolls, all with their own style of music. Meanwhile, Queen Barb is on a mission to take over all of Troll kingdom, turning every Troll into a Hard-Rock Troll, destroying their diversity and making them all the same. Although Poppy thinks she can change Barb’s mind with hugs, pop music and friendship – when she sets off to find her, things become more and more difficult as she sees the trail of destruction that Barb has left behind. Poppy and her friends travel through all the different lands of Troll Kingdom, determined to warn everyone and save them from being turned into Hard-Rock Troll Zombies!

Trolls World Tour is a silly but fun film with quite a few laughs. It is full of great music that kids will love, and many adults won’t be able to resist tapping their feet too. The story involves the usual goodie vs. baddie stuff but the positive messages about diversity and tolerance shine through. Although there is not a lot that will disturb children over the age of five, parents should know that this is a very flashy, noisy and fast-paced film that some children might find a little overwhelming, especially if they see it on the big screen at the cinema, therefore, parental guidance is recommended for children aged 5 to 7.

The main messages from this movie are that the world is a better place if we can learn to appreciate the differences and diversity between us and live together in Harmony.