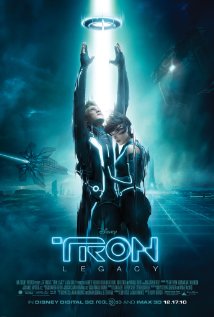 Not suitable under 10, PG to 12 (Violence, Disturbing scenes)

Twenty-one years after Kevin Flynn (Jeff Bridges) developer of the Tron video game and owner of the multi-billion dollar computer company Encom disappears, his son Sam (Garrett Hedlund) shows no interest in his father’s company. He is a rebellious thrill seeker whose main aim in life seems to be to sabotage his own company. Sam receives a visit from Alan Bradley (Bruce Boxleitner), his father’s best friend, who tells Sam that he received a message from his father on his pager the previous night. Sam visits his father’s old video games arcade, which has been closed up for the past twenty years. There he discovers a hidden room containing his father’s experimental teleportation equipment and is teleported into the “Grid”, a digital world populated by computer programs in human form, where gladiator styled games take place.

Within moments of arrival, Sam is apprehended by guards and forced to fight for his life in gladiatorial games. However, when Sam is cut during a fight and a drop of his blood falls to the ground, he is identified as a user rather than a program and the fight is stopped. Sam is taken to a program called Clu, who Sam initially believes to be his father. However Clu, who was created by Kevin Flynn in his own image, has become corrupt and is now an evil Overlord. Clu forces Sam to participate in “The Challenge of the Grid” but just before Sam is about to be permanently eliminated, he is rescued by a mysterious black helmeted player. Sam’s rescuer is  Quorra (Olivia Wilde), who takes Sam to meet with his father Kevin Flynn

We learn that Clu has been trying to capture Sam’s father for the past twenty years, needing the information contained within Kevin Flynn’s life disk to escape to the real world. Sam realises that the only way to stop Clu is to return to the real world where he can easily delete Clu’s program from the Grid. His quest is now to do this before being stopped by Clu and his minions.

Tron: Legacy contains CGI generated and at times intense, action violence, including fighting, explosions and bike and car chases. While the film does not depict blood and gore, younger children may find some of the injuries depicted scary and or disturbing. Examples include:

There is also a lot of associated merchandise being marketed.

Tron: Legacy is a science fiction action adventure aimed at a teenage audience. The film is visually stunning and will easily entertain its intended audience. Parents should be aware that, despite the lack of blood and gore, the intensity of the violence coupled with occasional scary images may disturb and frighten younger viewers. Younger children may also find the film’s running time of 125 minutes too long.