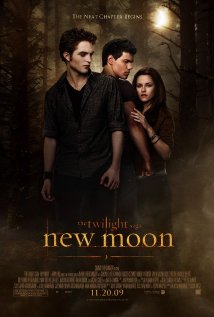 New Moon begins with Bella Swan’s (Kristen Stewart) eighteenth birthday. All goes well until Bella goes to Edward Cullen’s house for a birthday dinner party. Edward along with the rest of his family are vampires and when Bella accidentally receives a paper cut resulting in a drop of blood falling on the floor, Jasper (Jackson Rathbone), a family member and vampire loses control and attacks Bella with several members of the Cullen family having to restrain Jasper. In an effort to protect Bella from the dangers associated with vampiric life, Edward and the entire Cullen family leave the town of Forks with Edward vowing to never see Bella again.

A heartbroken Bella falls into depression that lasts for months until she discovers that placing herself in dangerous situations causes a ghost like image of Edward to appear, pleading with Bella not to place herself in danger. Desperate to make contact with Edward even if only in ghost form, Bella devices a risk taking scheme that will force Edward to make contact. To assist her scheme Bella enlists the aid of her childhood friend Jacob Black (Taylor Launter), a Native American, and it is not long before romance begins to blossom between Bella and Jacob. However, the budding romance is short lived when dormant genes in Jacob come to life and Jacob transforms into a werewolf.

In an effort to make contact with Edward, Bella places herself in peril by jumping off a high cliff into the ocean but is fortunately rescued from drowning by Jacob. The event causes Alice Cullen (Ashley Greene), to mistakenly foresee Bella’s death with Alice informing Edward of Bella’s death. Unable to live without Bella, Edward seeks his own death by going to Italy and begging the Volturi, (Vampiric aristocracy) to kill him, but the Volturi refuse Edward’s requests.

While New Moon contains some violence, blood and gore are kept to a minimum. Examples of violence include:

Some of the above mentioned violent scenes could also scare or disturb children aged eight to thirteen.

Most children over the age of thirteen years should be able to cope with the scary images and supernatural themes depicted throughout this film, although parental guidance may be needed particularly around the suicide theme.

There is some reference to substances in this movie, including:

Twilight Saga: New Moon is a supernatural thriller film specifically targeted at younger teenage girls. The film’s main focus is a teenage girl having her heart broken and how she responds to this. Kristen Stewart’s performance stands out from the other cast members including Robert Pattinson. With a running time of just over two hours the film drags on, falling flat in several places.

The main message from this movie is that love will survive over any and all obstacles, if it is strong enough.

This movie could also give parents the opportunity to discuss with their children Bella’s extreme reaction to Edward leaving her, and the destructive behaviours and intentions of both lead characters. Parents may wish to discuss the effect of Bella’s behaviour on those around her and alternatives that may have allowed Bella to better cope with the situation.