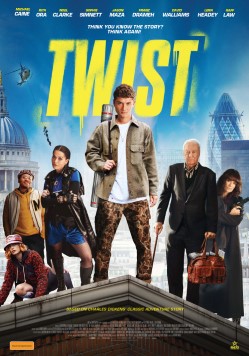 Talented graffiti artist and street kid, Oliver (Raff Law), finds himself on the run from a traffic officer after he helps a young mother in a sticky situation. Helped by a band of ruffians who immediately see his potential, Oliver is presented to master thief, Fagin (Michael Caine), who has created a makeshift ‘family’ of orphans who rob from the rich (and from criminals) in order to survive. When Oliver is recruited to help with a daring art heist, retrieving a priceless painting stolen from Fagin years before, he begins to realise that all is not as it may seem. His newfound family, including Red, aka Nancy (Sophie Simnett), Dodge (Rita Ora) and Batesy (Franz Dramen), is in danger of not only being caught by the police but also of being killed by the psychotic and menacing Sikes (Lena Headey), an old associate of Fagin’s who has her own agenda.

Loss of parents; Loss of family; The fight to simply survive on the streets; Child and youth exploitation; Revenge.

Twist is a modern-day retelling of the timeless classic, Oliver Twist, by Charles Dickens. The plot is fast paced and the characters are well cast, however, the content is primarily geared to older children and adults and parental guidance is recommended for children aged 13–15 due to violence, language, themes and sexual references.

The main messages from this movie are that everyone needs family and a sense of belonging and that sometimes your morals and integrity are the most valuable things you can ever possess.