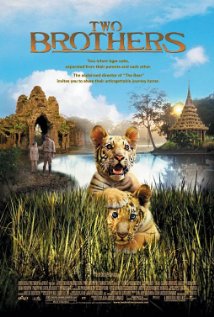 angha and Kumal are two tiger cubs born in the Cambodian jungle at Angkor Wat. One day while playing, Sangha is chased by a bandicoot and runs up a tree. He falls out of the tree injuring a paw. When hunters come to loot Angkor Wat, they see the tigers and shoot at them. Mother tiger picks up injured Sangha and escapes but the father is shot trying to protect Kumal. Kumal is rescued by the hunter who takes him back to the village. There the hunter is arrested and Kumal gets sold to a circus where his keepers are rather cruel. Kumal languishes in his cage and it seems as though he might die but an old tiger, Caesar, who Kumal will replace, manages to raise his spirits.

Meanwhile Sangha and his mother are caught in a trap and let out for sport for the royal party. The Prince shoots at the mother but she doesn’t die and manages to escape. Sangha is then taken home by the French Colonial Administrator and lovingly raised by his son Raoul. Raoul and Sangha become great friends until Sangha becomes too big for the house and causes much havoc everywhere he goes. Raoul’s parents decide Sangha will have to leave much to Raoul’s great disappointment. The Prince buys Sangha and he’s kept chained in a dungeon with many other exotic creatures. However his main reason for obtaining Sangha was to watch him fight another tiger in an arena where they will fight to the death. A fierce, wild tiger is sought for the match and as it happens, it turns out to be Kumal. What follows is quite inspiring.

There is some violence in this film directed towards the tigers:

Some scenes in this film would disturb children in this age group:

Children in this age group would not be scared by this movie but they could still be disturbed by the treatment of the tigers.

There is no substance use in this movie.

The message of this movie is one of conservation and protection of beautiful, endangered animals.