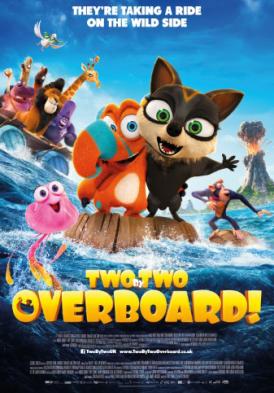 Not suitable under 5; parental guidance to 8 (themes, violence, scary scenes)

A great flood fills the world with water and an animal settlement, sailing on an ark in search of land, begins to run out of food. Unlikely pals Leah and Finny demonstrate that carnivores and herbivores can not only get along, they can become best friends as well. When the pair accidentally fall overboard, they try to get back to the ark but a violent storm pulls them apart. While Leah washes up on a distant island, Finny finds a ‘Nestrian’ community full of creatures just like himself who have built a safe colony under the sea to protect themselves from predators. When Leah is captured and the ark arrives on the island, Finny tries to convince Patch, the Nestrian leader, to release Leah and help the others but, fearful of the destruction outsiders could bring, his request is refused. When a fiery volcano threatens to destroy the island and everything in its path the animals must set their differences aside and work together to help each other in order to save themselves.

Children/animals being separated from parents; Natural disasters; Mistrust of those who are different from you.

Two by Two: Overboard! is an animated adventure based very loosely around the story of Noah’s Ark and is a sequel to the 2015 film, Two by Two. The characters, dialogue and bright animation are all aimed at a younger audience but many of the dramatic scenes and underlying themes are too intense for this age group. Therefore, the film is not suitable for children under 5 and parental guidance is recommended to 8.

The main messages from this movie are that people can change and that truces are possible; that we are all connected; and when disaster strikes, we must all work together in order to survive.