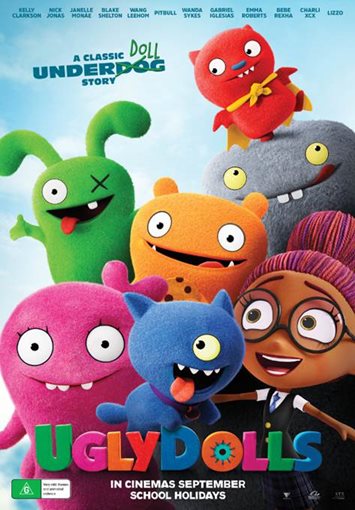 Parental guidance recommended for under 6; Suitable for 6+ (some violence and scary scenes).

Uglyville is a town full of ‘ugly’ dolls who have been rejected due to imperfections, only they don’t know that. Moxy (voice of Kelly Clarkson) is a free-spirited eternal optimist who believes that each new day will bring ‘her child’ to take her home to love. It eventually dawns on her that instead of waiting for her child to come, she needs to be pro-active. Against the advice of Ox the Mayor (Blake Shelton), she therefore decides to enter the real world and takes her friends with her, Uglydog (Pitbull), Lucky Bat (Leeholm Wang), Wage (Wanda Sykes) and Babo (Gabriel Iglesias).

The friends find a tunnel that takes them to the Institute of Perfection, where ‘perfect’ dolls are trained for the real world. There they meet Lou (Nick Jonas), who controls the Institute and is adored by all. Lou tells the ugly dolls that they can never enter the big world because they are imperfect but he allows them to stay for a while. Moxy is certain she can make it in the real world and sets out to prove Lou wrong. There are many obstacles and rejections along the way but Moxy never gives up.

There is some violence in this movie, mostly done for laughs, including:

There is some coarse language in this movie, including some name calling such as:

UglyDolls is an animated comedy which explores the issues of body image and the fact that beauty is what is inside a person not what’s on the outside. This important message makes it a valuable movie for young children to see, however there are some scary scenes and violence so parental guidance is recommended for under 6.

The main messages from this movie are that regardless of appearance the most important thing is to have a kind heart; to believe in yourself; it’s our differences that make us shine and our flaws that make us unique; and not to give up because you’re not ‘perfect’.