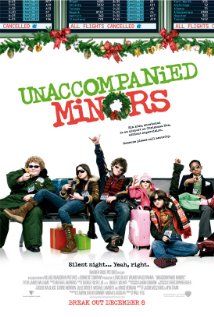 Not recommended under 8, PG to 13 (Viol. Scary scenes. Theme)

As unaccompanied minors at the airport, the children are taken by Passenger Relations worker, Zach (Wilmer Valderrama) to the Unaccompanied Minors (UM) Lounge. The five older children decide that the chaos of the UM Lounge is not for them and make their escape. This action earns them the wrath of the surly Passenger Relations manager, Oliver (Lewis Black), who has also had his holiday to Hawaii ruined by the weather. The children are caught by security and thrown back into the UM Lounge.

Undaunted, they group together, realising that only as a team can they free themselves again. Spencer has added incentive to escape, as he has now become separated from his sister. With their combined abilities and the aid of a soft hearted Zach, they again attempt an escape, all the while facing the increasingly desperate efforts of Oliver and his security team to control them.

There is some violence in this movie, mostly intended for comic effect, including:

Most children in this age group would be ok with the above-mentioned scenes, although some could be concerned by the mishaps Spencer’s father goes through on his way to the airport.

There is one scene in which Spencer’s auntie wakes up on Christmas Day with a bottle of spirits in her hand and looking hung over.

There no coarse language in this movie, but a bit of name-calling including fat boy, idiot, moron, noodle-head, suckers, psycho, goofball.

While many children will enjoy the slapstick and occasional toilet humour in Unaccompanied Minors, adolescents and adults may find the humour weak and plot improbable.

Parents could discuss with their children the real-life consequences of using violence to resolve issues, and the impact of divorce.