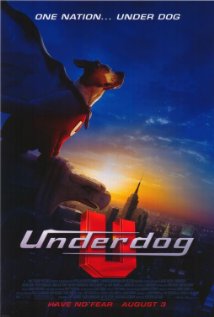 Not recommended under 5, PG to 10 (Violence, themes)

Underdog follows the exciting exploits of a failed Beagle sniffer-dog who develops supernatural abilities after accidental exposure to a mad scientist’s experimental DNA formula.
Self-proclaimed ‘visionary’ Dr. Simon Barsinister (Peter Dinklage) and his assistant Cad (Patrick Warburton) capture Underdog (voice of Jason Lee) for use in their animal experimentation program that aims to develop an army of super-powered animals.  While trying to escape the mad doctor’s laboratory, Underdog is doused in the experimental serum, which gives him incredible powers of speed and strength in addition to the ability to fly and speak English.
Underdog is then adopted by security guard Dan Unger (James Belushi), who takes the Beagle home as a pet for his teenage son Jack (Alex Neuberger).  Jack initially resents the dog (whom they name ‘Shoeshine’), seeing it as a token gift from a father who is almost never home.  However, soon the two make friends and Jack discovers the beagle’s amazing abilities which he decides to keep a secret.  Jack encourages the super-dog to use his extraordinary gifts to help others and ‘Shoeshine’ becomes a super-hero who carries out a series of amazing rescues.
Meanwhile, Dr. Barsinister plots to capture Underdog to retrieve the experimental DNA he needs to take over the country.  Eventually there is a final showdown between Underdog and the mad doctor, his assistant Cad and the doctor’s three trained German Shepherd dogs.

Younger children in this age group may also be disturbed by some of the above-mentioned scenes, particularly references to experiments on animals and the scene where it is thought that Underdog is dead.

Underdog is a fast-paced family comedy drama pitched at children under 15 which will also be enjoyable to older audiences who will appreciate several clever references to the Superman film series.
The main message from this movie is that we are all “born for greatness” and will uncover a wealth of wonderful things inside ourselves if we don’t give up.
Values in this movie that parents may wish to reinforce with their children include: