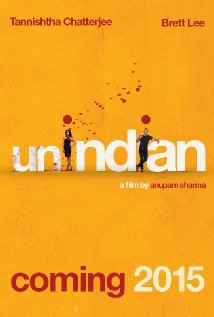 Not recommended under 13; parental guidance 13-15 (Sex scene; scenes which may disturb young children)

Meera (Tannishtha Chatterjee) is an Indian immigrant living in Sydney, Australia. She is a single mother, divorced from her husband, living with her ten-year-old daughter Smitha (Maya Sathi) and working in marketing for the Cochlear Company. Meera’s parents (Supriya Pathak and Akash Khurana) move to Australia to be near their daughter. They are very anxious to find a suitable husband for Meera and think they have found the answer in Samir (Anupam Sharma), a doctor from a very respectable Indian family. The problem for Meera is that while respecting her Indian traditions, she doesn’t want to be told who to marry, particularly a man she finds arrogant and vain.

By chance Meera meets Will (Brett Lee), an average Aussie guy who teaches Australian English at the University of New South Wales. Will is captivated by her beauty and with the help of his friends T.K. (Arka Das) and Mitch (Adam Dunn) he sets about trying to win Meera’s heart. This proves quite complex however, as trying to breach the gap between the two cultures is no easy task for Will or Meera.

Children in this age group are also likely to be disturbed by the above scene.

Children in this age group may also be disturbed by the above scene.

Younger children in this age group may be disturbed by the above-mentioned scene.

UnIndian is a romantic comedy about a cross-cultural relationship and the hurdles the couple have to overcome. In true Bollywood style, it is bright and colourful and has a good message of tolerance and integration. As it contains a sex scene, for which it is rated M, it is not suitable for younger viewers and young children may be scared by Deepak’s kidnapping of his daughter.

The main messages from this movie are that different cultures can live harmoniously with each other and that people should look for the positives rather than the negatives, in each other and in other cultures.

Parents may wish to discuss Deepak’s motives for wanting to take Smitha back to India. Was it because he loved her or was it just for his own needs?