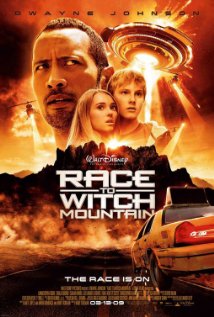 Not suitable under 8, Not recommended under 10, PG to 13 due to violence, scary scenes and themes

Jack Bruno (Dwayne Johnson) is an ex mobster who is now earning an honest living driving tourists around Las Vegas. He finds two teenage children, who have appeared out of nowhere, sitting in the back seat of his cab. Seth (Alexander Ludwig) and Sara (Anna Sophia Robb) ask Jack to drive them to the desert telling him it is urgent that they get to there without delay. Jack finds their money too good to refuse and accepts the fare. However, before Jack and his mysterious passengers travelled too far down the highway they find themselves pursued by government agents in black SUVs headed by Henry Burke (Ciaran Hinds). Seth uses superhuman powers to crash the pursuing vehicles and Jack, thinking that the occupants are mobsters, warns them off.
Jack, Seth and Sara travel to an abandoned shack in the middle of the desert where the teenagers reveal their alien identity and the three are attacked by an alien predator called a Siphon.
After another escape from government agents, Jack decides to head back to Las Vegas to enlist the help of Dr Alex Friedman (Carla Gugino). Alex takes Jack and the children to meet Dr. Donald Harlan (Garry Marshall), an expert on government conspiracy and UFO cover-ups. Harlan tells them that the government is holding Seth and Sara’s spaceship at a secret government base inside Witch Mountain. Jack, Alex and the children leave Las Vegas and head straight for Witch Mountain with the Siphon in close pursuit.

Race to Witch Mountain contains frequent action violence, violence against children, some intensity and peril, infrequent threats of violence and some intimidation. For example:

There is some name-calling in this movie, including:

Race to Witch Mountain is a Disney science fiction action film likely to appeal to older primary aged children (ten years and over) and younger adolescents. The film is packed with action, explosions, smoke and sparks as well as car chases, danger and escapes. Children under the age of ten years may find the amount of violence and scary scenes overwhelming and possibly distressing.
The main message from this movie is that humans are capable of displaying selfless acts of compassion towards complete strangers even if they are aliens.