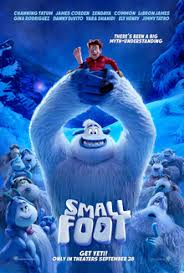 Not recommended under 5, parental guidance recommended to 8 (some violence and scary scenes and language)

Migo (Channing Tatum), an enthusiastic yeti who loves his tribe and always tries to obey their laws, no matter how ridiculous they may be, is banished for telling the truth about witnessing a plane crash and encountering a smallfoot (human). He meets a secret society of yetis, led by the Stonekeeper’s daughter Meeshee (Zendaya), who also believe that smallfoot exists and together they hatch a plan to prove their existence to the entire yeti community. Migo disappears into “the great nothingness” and makes his way down the mountain, below the clouds, where he finds a human village and an animal activist, turned TV show host, called Percy (James Cordon) who tries to get his producer to dress up like a yeti to improve their terrible ratings. After a rough start to their relationship due to communication issues (the yeti’s speech sounds like angry growling to the humans and human speech sounds like high pitched chipmunk chatter to the yetis) Percy accompanies Migo back to the his village. While the yeti (smallfoot) encounters are met with amazement, and where humans are concerned often terror from both sides, they soon learn that they have far more to fear from ignorance than they do from each other.

Banishment, separation from a parent and community, some scenes showing animated animal distress.

Smallfoot is a feel-good, animated, musical. Aimed at children, this film is a movie the whole family can enjoy together.

The main messages from this movie are to question things that don’t make sense, to listen to and learn from those who are different and that even when the truth is scary it is better to know and understand it than to be uninformed and live a lie.

This movie could also give parents the opportunity to discuss with their children the importance of investigating the truth for themselves without blindly following age old traditions or outdated knowledge, the importance of making their own calculated judgements based on fact and experience and reason and the importance of communication with others instead of hiding away or shutting yourself off from those who are different.