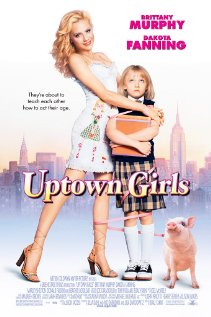 Molly and Rae are two vastly contrasting characters who share similar backgrounds. Molly Finn is a twenty two year old orphaned daughter of rock star parents who died in a plane crash when she was just a child. She was left plenty of money and grew up having everything she could possibly need except for the one thing she craved – a loving relationship. Thus when she meets Neil, an upcoming pop star, she takes him home and doesn’t want him to leave. Neil however feels totally suffocated and leaves after a few days. In the meantime Molly’s financial trustee takes off with all of her money along with many other peoples’. Molly is left penniless, forced to leave her apartment and look for a job for the first time in her life.

After her first employment position turned out to be a disaster, Molly takes a job as Rae’s nanny. Rae is the eight year old daughter of a successful business woman who signs up new musical talent and is totally disinterested in Rae, preferring to give her everything she wants. She is thus a thoroughly spoiled, obnoxious child who is full of smart, hurtful comments to everyone she meets. Rae’s father had been in a car accident which left him in a coma and Rae won’t have anything to do with him. She hides her hurt by being totally controlling, obsessively neat and clean, highly disciplined and unemotional. Molly, on the other hand, is a free spirited, ‘hippyish’ girl, who lives in a mess, infrequently washes her clothes and dishes and keeps a pig for a pet. The two girls instantly dislike each other but gradually they each learn from the other and Molly eventually helps Rae to open up and show her emotions.

There is some comic violence in this movie including the following:

Also there is a little violence which is not comic:

There is some material that might scare children in this age group:

Children in this age group might still be upset by the fact that Molly is an orphan and Rae a neglected child. Also the fact that Rae’s dad is in a coma and dies.

Children in this age group should be okay to see this movie.

There are quite a lot of sexual references in this movie including:

There is no nudity but Neil and Molly obviously have a sexual relationship. Also Neil stays the night with Rae’s Mum.

There is quite a bit of drinking and smoking at parties, night club, etc. Also Rae asks Molly if she’s “on crack”.

There is some coarse language including the words:

Rae gives the finger a couple of times.

The take home message would be that good can come out of adversity.

Values parents may to discourage include: