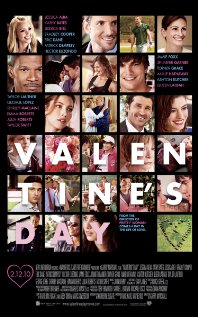 Not recommended under 15 (Sexual references, themes)

Valentine’s Day follows the intertwining lives of a group of friends and some strangers as they go about preparing for, enjoying and enduring this special day. We meet Reed Bennett (Ashton Kucher) who begins the morning by proposing to his girlfriend Morley Clarkson (Jessica Alba). Meanwhile Reed’s best friend Julia Fitzpatrick (Jennifer Garner) is falling for married heart surgeon Dr. Harrison Copeland (Patrick Dempsey). Julia’s friend Kara Monahan (Jessica Biel) is planning an ‘I hate Valentine’s Day’ party because she feels she is the only person on the planet who repeatedly spends the day alone.

Kara’s main client, sports star Sean Jackson (Eric Dane) comes ‘out of the closet’ during the press conference that she organizes while Kelvin Moore (Jamie Foxx) moves about the city interviewing strangers about their thoughts on love and Valentine’s Day. He interviews Willy (Taylor Lautner) and Felicia (Taylor Swift) a very hands-on, affectionate, high school couple about their relationship. Felicia’s friend Grace (Emma Roberts) and her boyfriend Alex (Carter Jenkins) are planning to have sex for the first time on Valentine’s Day. Meanwhile Jason (Topher Grace) learns to appreciate and understand his new girlfriend Liz (Anne Hathaway) who moonlights from her office job as a phone sex worker.

A young boy named Edison (Bryce Robison) links many of these stories together as he struggles to understand the meaning of love, the nature of Valentine’s Day and come to terms with the fact that his mom (Julia Roberts) isn’t there to share the holiday with him.

Apart from the above-mentioned violent scenes, there are no scenes in this movie that are likely scare or disturb children under the age of five.

Apart from the above-mentioned violent scenes, there are no scenes in this movie that are likely scare or disturb children aged 5-8.

Valentine’s Day is a romantic comedy featuring an all-star cast. It is a light hearted film that is likely to be enjoyed by older teenagers, but may attract children because of a cast list which includes Taylor Swift and Taylor Lautner.

The main message from this movie is that true love does exist, sometimes where you least expect to find it.