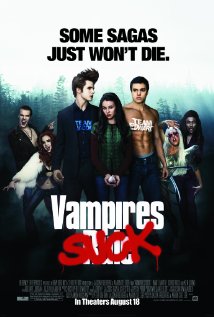 Not suitable under 13, not recommended 13-15 (Violence, sexual references, scary scenes and coarse language).

Vampires Suck is a parody of the “Twilight” movie series. The film’s plot consists mainly of a patchwork of events taken from the first two films in the series Twilight and The Twilight saga: New Moon.

Becca Crane (Jenn Proske) moves back to the small Washington town of Spooks to live with her divorced father Frank Crane (Diedrich Bader). At her new school Becca is immediately attracted to, and forms a relationship with, the mysterious Edward Sullen (Matt Lanter), who along with his adopted family is a vampire. The plot thickens when a love triangle develops between Edward, Becca and Becca’s childhood friend Jacob White (Chris Riggi), a Native American who also happens to be a werewolf, and Becca’s life is threatened by a trio of rogue vampires.

Vampires Suck contains some nudity and sexual activity, including:

Vampires Suck is a parody of the Twilight movies from the writers/directors of Epic Movie, Date Movie and Meet the Spartans. It relies heavily on crude humour and sexual references rather than clever satire, and contains no real message. The word vampire in the title may attract teenagers, but it is not suitable for those under 15.

Parents of older children may wish to discuss the features of the Twilight movies parodied by this film and what it has to say about the genre.