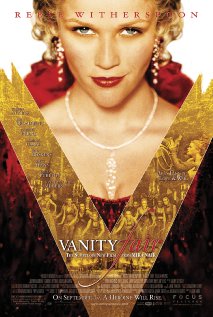 Vanity Fair is the story of Becky Sharp, a young, early 19th century woman, who is determined to rise above the low social status of her family and be accepted by England’s social elite. Her journey is intertwined with that of her close childhood friend, Amelia, who, although brought up in a well to do family, must later face many of the same social and economic situations that Becky does.

Becky begins her journey to fortune working as a governess for the family of Sir Pitt Crawley. Through her frankness, wit and charm she slowly wins the family over. Cantankerous Aunt Matilda is especially taken with her and invites her to London where Becky secretly marries her nephew Rawdon Crawley, heir to the vast family fortune. Rawdon goes off to war and when he returns learns that Aunt Matilda has died and that he has been disinherited. In attempting to maintain the lifestyle that they have been accustomed to Becky uses her feminine wiles and accepts assistance from the Marques de Styne who promises to help open doors to the highest ranks of society. Yet for his assistance Becky pays a heavy price and in many ways winds up losing more than she stood to gain.

The few instances of violence in this film were all quite realistic.

Two of the above scenes in particular could potentially disturb young viewers:

Children in this age group could also be disturbed by the above-mentioned scenes.

Some older children could also be disturbed by the above-mentioned scenes.

Some older children could also be disturbed by the above-mentioned scenes.

During one scene Rawdon and Becky are in bed, Rawdon is breathing heavily and sexual activity is implied.

Alcohol is widely used throughout the film:

There was no coarse language in the film, although a small amount of name-calling and other colourful phrases were used:

The main take-home message from Vanity Fair is that money can’t buy the things in life that are truly worth having. It also cautions us to be careful about what we wish for and how we go about getting it, because the final result may not be what we had hoped for.

Some issues and themes that parents may wish to discuss with their children are as follows: