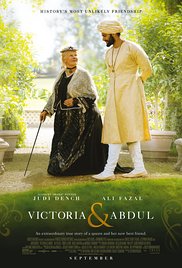 The film is based on the book of same name by Shrabani Basu, and on the real-life relationship between Queen Victoria and her Indian servant Abdul Karim.

Abdul Karim (Ali Fazal) arrives from India to participate in Queen Victoria's (Judi Dench) golden jubilee.  He and a companion, Mohammed, are to present the Queen with a ceremonial coin. The Queen is instantly attracted to the handsome young clerk who, against the rules, makes eye contact with her.

Abdul is ordered to stay in Britain and promoted by the Queen to the role of her ‘munshee’ - advisor about India and language teacher. The two forge an unlikely but devoted friendship, giving Victoria a new zest for life. However, the members of the Royal Household, heir to the throne Prince Albert, the Prime Minister and others in official positions are horrified by what is happening and are determined to end the friendship.

Colonialism and the British Empire; racism; the life of a monarch; ageing; sexually transmitted disease

Victoria and Abdul is an interesting and moving drama, with some lighter moments, based on a true story. It shows Queen Victoria at the end of her life, still grieving her husband Albert and servant John Brown, and feeling very much a prisoner in her life. She is surrounded by people who criticise her behind her back, but curry favour in her presence. The coming of a handsome, and very different, young man from India and the friendship that develops between them gives her life new meaning.

The film is most likely to be enjoyed by adults. The story is likely to lack interest for children under 10, there are scenes and themes that might confuse or scare younger viewers, and there is coarse language. Parental guidance is recommended for children aged 10 to 14.

The main message from this movie is that true friendship can develop between people of very different ages, race, religion and positions in life.