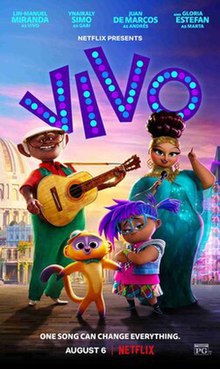 Not suitable under 6; parental guidance to 8 (scary scenes and emotional themes)

Andrés (voice of Buena Vista Social Club's, Juan de Marcos González), a retired band leader, and his loyal animal companion Vivo (voice of Lin-Manuel Miranda), a small golden kinkajou, are a talented musical duo who perform on the streets of Havana, Cuba. One day Andrés receives a letter from his long-lost sweetheart and former musical partner, Marta Sandoval (voice of Gloria Estefan), inviting Andrés to join her for her very last performance in Miami. Andrés dreams of making it to Miami and finally telling Marta how much he loves her but Vivo does NOT want to leave Cuba. The morning of their departure, Vivo wakes to find that Andrés has passed away quietly in his sleep – holding in his hand a beautiful song composed for Marta. Vivo decides he must make it to Miami and fulfil Andrés’ wish, to share the song with Marta before her last performance. When Andrés’ niece Rosa (voice of Zoe Saldana) and her quirky daughter Gabi (voice of Ynairaly Simo) come to Havana for their uncle’s funeral, Vivo decides to hitch a ride in their suitcase back to America so that he can get to Miami on time. Of course, things don’t go quite to plan and Gabi, with much delight, discovers the stowaway kinkajou and insists on helping him get to Miami. Together, the unlikely duo embark on an adventure through the streets of Florida, the wilderness of the Everglades national park and onto the glitzy boulevards of Miami, where they hope to make it in time for Marta’s last performance.

There is some mild slapstick violence in this movie, including:

Vivo is a fun and heart-warming musical adventure with an engaging plot and some very catchy songs. The animation is vibrant, there is great diversity in the characters, and Vivo the kinkajou is very cute. With some big-name Latin music artists involved, the film is a great way for young children to experience the joy and complexity of Cuban music. Best suited for families with children aged 6 and over, with parental guidance to 8.

The main message from this movie is that sometimes other people’s dreams are worth fighting for, even if it means we have to make a sacrifice. Another theme that runs throughout is the amazing power of music to create bridges between people.