Walking with dinosaurs; The movie 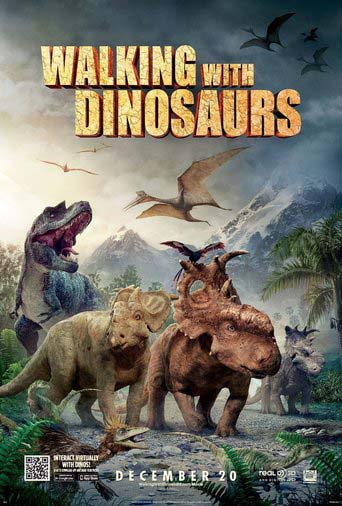 Not recommended under 8, PG to 10 (Scary scenes)

Walking with Dinosaurs is set seventy million years ago during the Late Cretaceous period. It is not a documentary, but an animated fictionalised account of the life of dinosaurs. Narrated by an ‘Alexornis’ bird named Alex (John Leguizamo), the film follows three Pachyrhinosaurus named Patchi (Justin Long), Scowler (Skyler Stone), and Juniper (Tiya Sircar) as they grow from young children into adults. Brothers Patchi and Scowler get into all sorts of childish trouble during their younger years. However, after Patchi meets and falls in love with Juniper, a female dinosaur of his same species, he is inspired to be the best he can possibly be. Throughout the course of the film, Patchi and his herd migrate every year in search of food, but the journey often proves dangerous. Patchi and Scowler lose their father who dies protecting them from other dinosaurs out hunting for food, and they find themselves needing to frequently run away from larger and intimidating species such as the Gorgosaurus.

Scowler eventually fights to become leader of the pack and take control of the herd, exiling Patchi and claiming Juniper as his own. Patchi, defeated and despondent after losing everything he cares about, nearly allows other dinosaurs to kill him for food. However, his friend Alex steps in and inspires him to continue fighting for the love of his life. Patchi scares off the other dinosaurs and goes after Juniper, wanting to tell her how he truly feels. When he catches up with the herd eventually, he sees that they are being hunted by some Gorgosaurus, and it seems as though his brother Scowler will be killed. Patchi tells the entire herd to come to his brother’s aid, and together, they fight off the hunters. Patchi finally becomes the head of the pack, living happily ever after with Juniper, and they ultimately have children of their own.

There is some animated violence in the film, including:

Children in this age group may also find some of the scenes and creatures scary.

Patchi falls in love with Juniper (with the scene including romantic music) but when his brother takes over as herd leader, he sees it as his right to claim her as his mate.

Some insults such as “runt” and “coward” and talk about dinosaur poop.

Walking with dinosaurs: The movie is an animated romance about one dinosaur’s journey to becoming a responsible and capable adult. Patchi begins as a love-struck young dinosaur who yearns to explore his surroundings and spend as much time as possible with Juniper. Over the course of the film, he learns to protect his friends and other members of his herd, going as far as being prepared to sacrifice himself to save his brother. Patchi steps into the role of leader of the pack, maturing and demonstrating to himself as well as others that he is capable of achieving anything he sets his mind to.

Children under 8 are likely to find some of the scenes and creatures scary, particularly in the 3D version so it is not recommended for this age group. Children with a real interest in dinosaurs may be annoyed or confused by the fictionalised aspects of the film, particularly the romance between Patchi and Juniper.

Parents may wish to discuss the fictionalised aspects of the film and what we really know about the type of creatures that dinosaurs were.