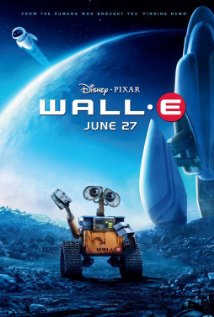 Not suitable under 5; parental guidance to 8 (violence and scary scenes)

700 years after planet earth has been abandoned, WALL-E (voice of Ben Burrt) a lone robot continues to function in his quest to clean up all the trash and waste that humanity left behind. WALL-E (Waste Allocation Load Lifter – Earth-Class) is an eccentric little machine who is desperately lonely. His only friend is a cockroach until a mysterious ship drops off a flashy, space-age, robot called EVE (Elissa Knight). EVE (Extra-Terrestrial Vegetation Evaluation) is on a mission to find life on earth and couldn’t care less about friendship. Undeterred by EVE’s tendency to shoot first and ask questions later, WALL.E shows her his collection of rarities, among them a solitary plant shoot he discovered growing amidst the garbage. Eve is delighted, places the plant in her cargo hold and shuts down. WALL-E is devastated. He looks after EVE, caring for her like a person, and accompanies her back to space when the ship arrives to pick her up. The space ship Axiom is run by the Captain (Jeff Garlin) with the aid of a lieutenant robot, Auto (Macintalk) and filled with thousands of surviving sedentary humans serviced by robots.
EVE is horrified when she learns that WALL-E has followed her and tries to get him back to earth before the Captain or Auto find out that there is a stowaway on board. The Captain is delighted that Eve has found a plant as this means that they can now return home. However, the computerized co-pilot is under confidential orders not to let the spaceship, with its human cargo, return to earth and sets about trying to destroy the plant and anyone who gets in the way. Wanting nothing more than to help EVE, WALL-E does all he can to save the plant and, in the process, teaches both the human passengers and the robot world about what it means to be human and how it feels to be alive.

Environmental impacts of our consumerist and ‘throw away’ society.

WALL-E is an animated adventure employing the use of some excellent computer animated graphics. At some stages the story becomes tedious and younger children may be bored. However, this family film contains some powerfully educational messages about commercialism and the consequences that global waste can have on our planet.
Values in this movie that parents may wish to reinforce with their children include:

This movie could also give parents the opportunity to discuss with their children the importance of making informed choices about what products to buy and what activities to choose, instead of letting advertising or popular culture determine how you will live your life.