War with Grandpa, The 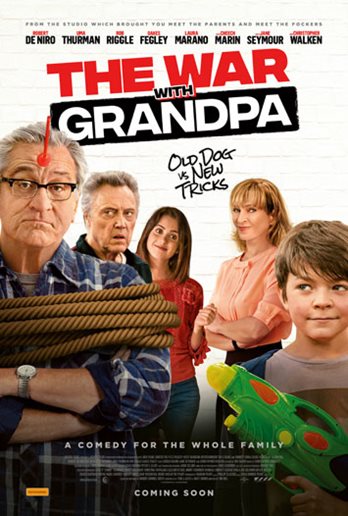 Not suitable under 8; parental guidance to 13 (slapstick violence, adult themes)

Ed (Robert De Niro) is getting older and his daughter, Sally (Uma Thurman), convinces him that it would be safer and better for him if he moved in with her and her young family. The only catch is that their house isn’t quite big enough for an extra person and it means that 11-year-old Peter (Oakes Fegley) has to give up his room and move into the dusty old attic. Peter is so annoyed by this that he declares war on his grandpa. At first, Ed ignores the declaration of war but after Peter pulls some mean tricks, he decides that he needs to retaliate, and the rules of engagement are drawn up. What starts as a series of witty and comical pranks soon escalates into total mayhem, and Peter and his Grandpa must find a way to make peace with each other. Not only do they find peace, they end up closer than ever.

There is frequent slapstick violence for comedic effect in this movie including:

There are some sexual references and mild romance in this movie, including:

The War with Grandpa is a silly slapstick comedy that will give 8 to 13-year-olds a giggle. However, parental guidance is recommended for this age group as there is a lot of slapstick violence and pranks which in real life could potentially cause severe injury or death but seem to have very mild consequences in this film.

The main messages from this movie are that war is not something to be glorified and it only brings misery; and that different generations have much to offer each other.