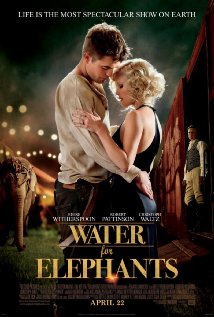 Not recommended under 13, PG to 15 (Themes; Violence; Disturbing scenes)

Water for Elephants is set in the depression era of the 1930’s. Jacob Jankowski (Robert Pattinson) is on the point of graduating as a veterinarian when his parents are killed in a car accident and he finds himself homeless. After aimlessly jumping on a passing train, Jacob enters the world of a travelling circus, complete with misfits, drifters and oddballs struggling to survive in the hard economic times.

August (Christopher Waltz), the owner of the circus, only allows Jacob to stay because he believes that he is a vet and can look after the circus animals. August is a flamboyant but cruel and controlling man married to the beautiful Marlene (Reece Witherspoon), star of the equestrian act.

Jacob is a compassionate and humane person who looks after the animals with great care and manages to tame Rosie the elephant, a seemingly impossible task. He finds himself in trouble when he and Marlene fall in love.

Water for Elephants is a romantic drama that captures an era of very different lives and standards. The themes and harsh realities depicted make the film more suitable for adults and older adolescents.

Parents may also wish to discuss the real life consequences of