Water Horse: Legend of the Deep 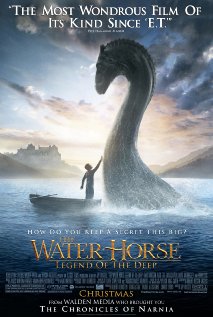 In the midst of World War II a lonely boy named Angus (Alex Etel) finds a mysterious egg in a tide pool near a loch. The egg hatches and, with the help of his sister Kirstie (Priyanka Xi) and the new handyman, Lewis (Ben Chaplin), Angus attempts to keep the rapidly growing water horse a secret from his mother (Emily Watson), and nosy, fortune-seeking locals. This proves easier said than done, especially when Captain Hamilton (Davis Morrissey) and his regiments move in and set up camp downstairs.

While the navy prepares for possible submarine attacks on the loch, Angus must entrust his dearest friend, the water horse, whom he has named Crusoe and who has completely outgrown the bathtub, to the loch. Things take a turn for the worse when the soldiers test torpedoes in the lake. The once tame and peaceful water horse, afraid for his life, turns violent and wild. The attack that the Captain has long feared comes not from the advancement of the German forces but from a fabled creature that very few believe even exist.

While Angus’ life hangs in the balance, the tables turn and with a little faith, and a little friendship insurmountable obstacles are overcome and natural order restored.

Children in this age group may also be disturbed by the violence and disturbing scenes described above.

The Water Horse: Legend of the Deep is a family drama, best suited to older children and adults. It features beautiful scenery and great computer animated graphics but is also somewhat dark and heavy. The film is broken up by a present day storyteller recounting the story to two young tourists as well as Angus flashing back to conversations he had with his dad. Younger children may be both confused and bored by these changes in context and dialogue.

The main messages from this movie are to believe in the magic of childhood and that everything becomes possible when we face the things we fear most.

Values in this movie that parents may wish to reinforce with their children include friendship, faithfulness, compassion and courage.

This movie could also give parents the opportunity to discuss with their children attitudes and behaviours, and their real-life consequences, such as blindly following orders, acting out of fear and trying to attack what we do not understand.