Way Way Back, The 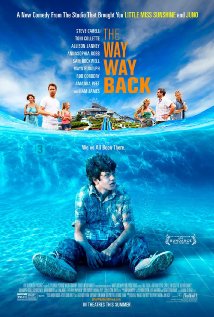 Not recommended under 14, PG to 15 (Themes; Coarse language)

The Way Way Back is a comedy-drama that follows fourteen-year-old Duncan (Liam James) as he goes on summer vacation with his mother Pam (Toni Collette) and her boyfriend Trent (Steve Carell). Despite Pam seeing only the good sides of her partner, Trent’s treatment of Duncan causes the teenager to escape their beach house whenever possible.

After riding his bike into town one day, Duncan comes across the local water park where he meets the eccentric and amusingly irresponsible Owen (Sam Rockwell), the owner of Water Wizz. Owen takes Duncan under his wing, hiring him as a helper and providing him solace from the neglect and mistreatment he experiences at home. Gradually, Duncan comes out of his shell, forming deep friendships with Owen, other staff members at the water park, as well as a young girl named Susanna (Anna Sophia Robb).

Duncan’s dislike of Trent is eventually revealed to be completely justified when Pam discovers that Trent has been unfaithful to her. Although it seems that Pam forgives him initially, the film ends with Pam choosing her son over her relationship with Trent. Despite needing to leave his newfound friendships behind, Duncan has his mother back and has grown into a young man with self-confidence and a sense of his own worth

Apart from the above-mentioned violent scene, there is nothing in this film likely to scare children in this age group

Children in this age group may be upset by the way Duncan is treated, for example:

There is some sexual activity and partial nudity in this movie, including:

There is a significant amount of coarse language in the film, including:

The Way Way Back is a satisfying, heart-warming coming-of-age story. The film follows Duncan as he changes from an awkward, insecure fourteen-year-old boy into a young adult with confidence and self-assurance. Owen is integral in shaping Duncan’s transformation, as he teaches him to follow his own path in life and to try and not worry about what other people think of him. Duncan progressively realises that he is capable of far more than he could have possibly imagined, and that life has much more to offer than he previously thought. The story has interest for teens, but its themes and coarse language make it unsuitable for under 14s.

The main messages in the film are: