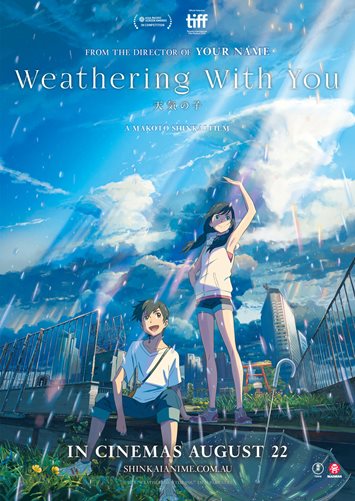 When Hodaka (voiced by Kotaro Daigo) leaves home to make a life for himself in Tokyo he has no intention of ever returning. On the ferry to Tokyo Hodaka nearly drowns but his life is saved by Mr. Suga (voiced by Shun Oguri) and after failing to find a job in Tokyo, Hodaka humbly seeks Mr. Suga’s assistance once more. While working as an editorial assistant for Mr. Suga and his niece Natsumi (voiced by Tsubasa Honda) Hodaka is asked to help with a story on ‘sunshine girls’. Believed to be similar to shamans these sunshine girls, or weather maidens, have become part of another world up in the sky. They, and they alone, are able to take a prayer or a wish to the sky and the sky will magically respond. Hodaka doesn’t believe the legend until he meets Hina, (voiced by Nana Mori) a young girl who prayed at a gate to save her mother and since that day has been able to influence the weather. Together they set up a business to briefly bring sunlight and blue skies to small patches of Tokyo. Hina uses the money they make to look after her little brother Nagisa (voiced by Sakura Kiryu) and Hodaka falls in love with her. When the curse of the weather maiden begins to come true and Hina begins to disappear Hodaka will stop at nothing to bring her back, even if it means crossing over into the sky world and condemning Tokyo to endless days of rain.

Weathering With You is an anime fantasy set mostly in Tokyo. The film is entirely in Japanese with English subtitles and as such will largely appeal to anime fans and lovers of Japanese culture and language.

The main messages from this movie are to believe in the impossible, that a world of magic lies beyond the clouds and that true love will conquer all.