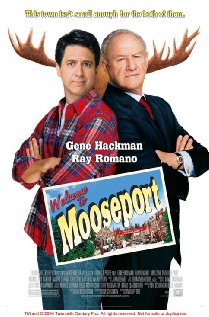 Newly divorced Monroe Eagle Cole has just stepped down as President of the USA and decides to move to his summer retreat in the small town of Mooseport, Maine. This is mainly due to the fact that ex-wife Charlotte is demanding the former marital home along with seven million dollars, rather than his preference for small towns. The folks of Mooseport are thrilled that “Mr. President” is coming to live in their town and go out of their way to make him welcome.

Cole arrives with his security entourage and is amused when the town’s leaders come to him with the proposal to be the new Mayor. Always a politician, Cole sees political advantage in this downward career move and graciously accepts the offer. However he, and the town’s leaders, are unprepared for him to be opposed in this election. His rival is all round ‘nice guy’ Handy Harrison, the local plumber and owner of Handy’s Hardware.

Cole’s publicity machine goes into overdrive to tackle this seemingly incontestable election. To make matters worse Cole takes a liking to Sally Mamis, local vet and Handy’s girlfriend for the past six years. Sally is at the point in the relationship where she’s tired of not being Handy’s wife, and so takes up Cole’s offer of a date.
Cole comes to learn that Handy is more than a formidable opponent in both areas. Handy also gets some support from ex-wife Charlotte who arrives on the scene to make sure it’s a ‘fair fight’.

There is some violence in this movie, all set in a comic context:

The only scary scene in this movie is the scene mentioned above, when Cole imagines attacking Charlotte with a knife

Children in this age group could be scared by the knife attack scene also.

Children in this age group could also be scared by the knife attack scene, as it is only after the event that it becomes obvious that he is only imagining his attack.

There are several sexual references:

At the start of the movie an old man is shown running in the nude from behind. He appears again in another scene. (Quite irrelevant)

The only sexual activity is performed by the dogs.

There’s drinking of alcohol at a party, at a restaurant and at home.

Cole talks about growing marijuana as a youth.

There are several uses of coarse language including the following:

The take home message is that genuineness and honesty is preferable to wealth and power.