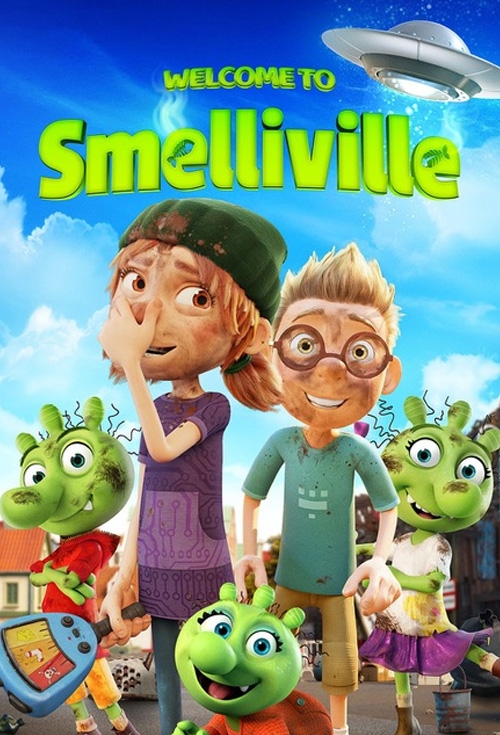 The idyllic little town of Smelliville has a problem: a big rubbish dump on the edge of town that stinks so bad that no tourist wants to visit, and even its residents avoid stepping outside because of the stench. The Mayor’s wife (Tracey Grey), however, thinks that she knows a way out of the mess: she approves construction tycoon Mr Hammer’s (Tom Zahner) plan to build a Wellness Temple in place of the dump. Little does she know that there are two problems: Mr Hammer is a ruthless crook only interested in his own profit, and the dump has new residents – the Ogglies, friendly little green creatures that feast on rubbish. And it’s the Mayor’s son Max (Ben Young) and his best friend Lotta (Lily Held) who are determined to save the Ogglies from having to move again, and to educate the town about the benefits of recycling waste.

There is some mild cartoon violence in this movie, including:

(The Ogglies) Welcome to Smelliville is an animated, family movie based on German author Erhard Dietl’s book series. Young children will likely respond but might also be challenged by the massive amount of toilet/gross-out humour, involving stench, dirt, burping, and farting. There are positive messages regarding empathy for and inclusion of outsiders, calling out ruthless capitalism, and recycling waste in an effort to help the environment. There are, however, several behaviours on display that are concerning, like primary school aged children lying to and tricking their parents, including sneaking out, breaking into places, stealing things, or reckless bike riding while fiddling with a smart phone; characters consuming toxic substances (to be fair, that’s a main point of the story that the Ogglies’ diet consists of  rubbish, and there is an awkward attempt of warning in form of a pigeon saying, “Kids, don’t try this at home – only Ogglies can eat that stuff!”, after an Oggly sculls a bottle of chain oil), and, most concerning, Max’s mum’s dependency on some designer drug. There is also a random mix of accents ranging from posh British to broad American, and bizarrely characters from within one family have different accents which is a tad strange. Some of the above-mentioned aspects make the film unsuitable for a very young audience and warrant parental guidance for a preschool and young primary school-aged audience.

The main messages from this movie are that everyone deserves a chance and that it’s important to try and see the world through other people’s eyes.