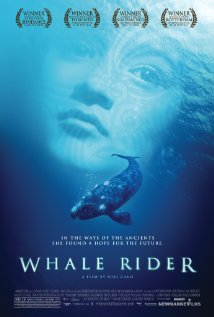 Koro is a Maori chief of a coastal village whose ancestor Paikea arrived there over 1000 years earlier riding on the back of a whale that had saved him from drowning. The movie starts when Koro’s son’s wife is giving birth to twins a boy and a girl. Unfortunately both the boy and the mother die leaving the girl Pai alone. Porourangi, the father, is distraught and leaves Pai to be brought up by his parents Koro and Flowers. Koro is a very traditional man who believes that the death of his grandson was a bad omen for the village and won’t accept Pai, a female, as his heir.

Consequently Koro teaches young men to be warriors so that one can succeed him. He throws a whale’s tooth into the ocean and sends the boys in to fetch it – the one who finds it will be his successor. However none finds it and Koro feels that he has failed. Koro fails to see that Pai has inherited many gifts and when she retrieves the whale’s tooth it only makes him angry. One day as Koro is walking down to the beach he finds that many whales have beached themselves which distresses him deeply. The whole village come to try and save the whales and get them back in the water to no avail. Then when all have left Pai approaches one of the whales and climbs on its back. She lovingly strokes it to which the whale responds and starts moving its tail. It then manages to turn around and heads out to sea with Pai on its back. It appears that Pai is drowning in the water but she survives and finally Koro accepts that Pai is his rightful successor.

There are a few violent scenes; however none are glamorised or performed by attractive heroes:

There are scenes in this movie that would scare children in this age group:

Children in this age group should be able to cope with the realities of life and death portrayed in this movie.

There is drinking of alcohol and smoking.

There is some coarse language. Some of the women’s talk is coarse. The Grandfather tells the boys that there are consequences for not getting it right – “their dicks will fall off – hold on to your dicks”.

The take home message of this film is that traditions can be challenged and changed if need be and that girls are able to take on traditional male roles.