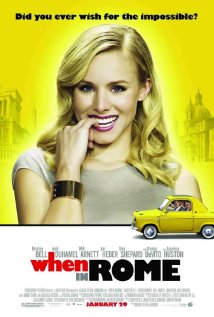 Not recommended under 8, PG to 13 (Themes, sexual references)

Beth (Kristen Bell) is a very successful art curator who has not been so successful in love. She travels to Rome for the wedding of her younger sister Joan(Alexis Dziena) to Umberto (Luca Calvani). Beth is immediately attracted to the best man, Nick (Josh Duhamel) but after seeing him with another woman drinks too much and ends up in a street fountain. Beth takes some coins from the fountain and, by magic, also steals the hearts of the men who threw the money in there.

Back in New York the bewitched men relentlessly pursue her and, to her amazement, so does Nick. Beth thinks he must also be under the spell and so does her best to avoid him.

There is some slapstick violence in this movie including:

When in Rome is a romantic comedy aimed at teenage girls. It is predictable, light hearted and not very original.

This movie could also give parents the opportunity to discuss with their children attitudes and behaviours such as: