When Marnie was there 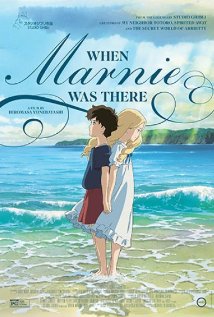 When Marnie was there is a Japanese anime film based on a novel of the same name. The film follows the story of Anna a 12-year-old girl who is living in foster care. She has very bad asthma, and is one day forced to move to a rural seaside town to spend the summer with relatives after she has a particularly bad episode. After exploring an abandoned mansion across the river from where she is staying, Anna has a dream about a blonde girl who lives there. She rows across the river to the mansion and there meets Marnie, the girl from her dream.

Marnie invites Anna to a party at the mansion, which appears to be renovated and full of life at the time. Later that night, Anna is found asleep near the Post Office and when she visits the mansion again, it appears dilapidated and run-down once more.

Eventually, Anna hears from others that the mansion is being restored because a new owner will be moving in. The new owner, Sayaka, discovers a journal written by Marnie hidden away in the mansion, and shares the details with Anna when she visits. The story that is revealed in this journal helps Anna to discover Marnie’s identity and gives her a new perspective on her own life.

Anna suffers from asthma and is seen coughing and distressed.

A schoolgirl refers to a man as a ‘perv’, as she attempts to convey that she is uncomfortable with the way he behaves around her.

There is mild use of substances in the film, including:

When Marnie was there is a haunting coming-of-age story of a young girl learning about her history and family. The film presents a discussion on the nature of life and death, and the manner in which life can be viewed in different ways. Anna learns that her history involves a great deal of tragedy, but also strength, perseverance and unconditional love. By discovering things about her past, Anna becomes more able to open up to the possibilities of her life ahead.

Because of its these themes, and some disturbing scenes, the film is not recommended for children under 10, with parental guidance recommended for the 10 to 13 age group. It is being shown in two versions – dubbed or subtitled – and subtitles may present difficulties for younger viewers.