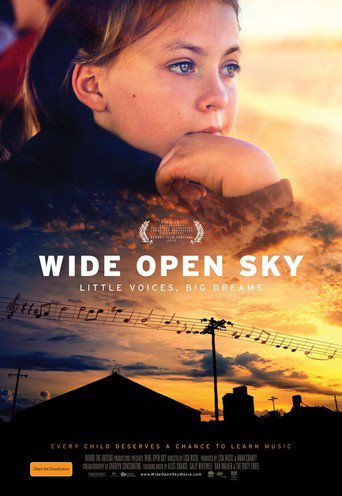 Suitable for all ages, but may lack interest for young children

Wide open sky is a documentary featuring Michelle Leonard, a remarkable choir conductor and music teacher. Every year Michelle travels over 4000 kilometres into some of the most disadvantaged areas of regional NSW to audition primary school children for her choir, Moorimbilla Voices. Most of these children have had limited exposure to music and live in regions where the main social activity is football. Michelle selects 120 children and takes them to music camp at Baradine where they have intensive training for 3 days. As a lot of the children are from families with no financial means of support, Michelle also spends a lot of time fund-raising. Many of the children have  never been away from home before, and Michelle is a hard taskmaster, but the children rise to the challenge. The training culminates in a performance with the Sydney Symphony Youth Orchestra in front of an audience of hundreds of people.

During the course of the movie it is obvious that the children grow, not only in the knowledge of music, but also in their own self-confidence and their ability to express themselves artistically and have big dreams for their future.

Wide open sky is an inspirational story of one woman’s passion for music and the drive to instil this love of music in children from outback Australia. The transformation of the children’s lives is remarkable. The movie is also interspersed with some beautiful cinematography featuring Australian landscapes. While the movie has nothing in it that would scare or upset children, it may be boring for small children.

The main messages from this movie are that with determination, passion and hard work, you can achieve great things.

Parents may also wish to discuss the fact that people have different strengths and talents and that not everyone has musical talent but that’s ok too.