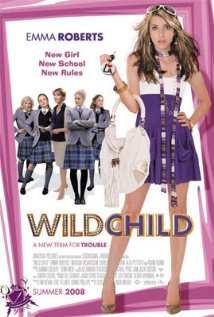 Not recommended under 10, PG to 13 (Sexual References and Coarse language).

This film depicts the experiences of Poppy Moore (Emma Roberts), a wilful, almost out-of-control, Malibu teenager.  After one particularly wild party, her father (Aidan Quin) seeks to reform Poppy by sending her to Abbey Mount, a highly conservative girls’ boarding school in England.  Extremely unhappy with her new surroundings and the strict rules of this institution, Poppy rebels through continuously obnoxious and disrespectful behaviour.
After weeks of such arrogant selfishness, Poppy begins to feels isolated and eventually drops her guard enough to become friends with the other girls in her room.   Nevertheless, Poppy still embarks on an all-out quest to be expelled so that she may return home.  Part of this plot involves the plan to get caught ‘snogging’ Freddie, the headmistress’s son (Alex Pettyfer).  Her campaign of bad behaviour also earns her the wrath of Hillary, the head prefect (Georgia King), who has never liked Poppy and who proves to be a dangerous enemy.
At first, the headmistress, Mrs. Kingsley (Natasha Richardson) seeks to overlook Poppy’s wild behaviours in the hopes that she might be turned around.  Ultimately, however, it seems that Poppy has gone too far and must face the consequences of her actions.

There is an abundance of mild coarse language in this movie, including:

Wild Child is an English comedy for teens featuring some good young performers.  While the behaviours and language depicted within the first part of the film may be concerning for some parents, the moral of the story could provide a valuable springboard for family discussions.

The main message from this movie is that no one should give up on themselves or others.  Even the most obnoxious person can change.
Values in this movie that parents may wish to reinforce with their children include:

This movie could also give parents the opportunity to discuss the hurtful effect that self-centredness can have on other people.  Poppy found herself increasingly isolated as a result of her disrespectful and thoughtless behaviour.  However, when she began thinking about the hurt she had caused others and tried to change her life, she found that people began respecting her and she was able to make some genuine friends.