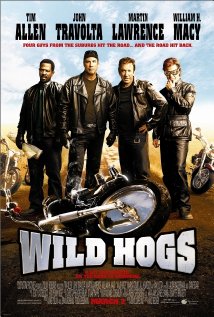 The Wild Hogs are a group of four middle-aged men who ride around on Harley Davidson motorcycles at weekends pretending to be a biker gang. Woody (John Travolta), Doug (Tom Allen), Bobby (Martin Lawrence), and Dudley (William H. Macy) are all facing mid life crises to varying degrees and, bored with their predictable suburban lifestyles, decide to embark on a cross-country road trip.
While travelling cross-country the four friends find themselves in one misadventure after another. On their first night out they manage to burn their tent to the ground and are propositioned by a gay highway patrolman. The situation goes from bad to worse when the Wild Hogs have an altercation with a real motorcycle gang the Del Fuegos led by a hard-core biker named Jack (Ray Liotta). Jack bullies the Wild Hogs and relieves an unwilling Dudley of his Harley Sportster. Woody steals back the bike, but in the process blows up the Del Fuegos’ clubhouse.
On the run from the Del Fuegos, the Wild Hogs take refuge in a quiet New Mexico town where they are befriended by the town’s inhabitants and Dudley falls in love with Maggie (Marisa Tomei) the owner of the town’s diner. Soon Jack and the Del Fuegos arrive and the inevitable showdown occurs.

Most of the violence depicted throughout Wild Hogs is slapstick but some is more brutal. Violence included:

In addition to the above-mentioned violent scenes, there are some scenes in this movie that could scare or disturb children in this age group, including the following:

Wild Hogs is a predictable comedy aimed at an adult audience, but the actors chosen to play the main characters, together with the film’s subject matter may make the film appealing to a wider range of audience including younger adolescents. The main messages from this movie are:

Parents may also wish to discuss the homophobia seen in the film.