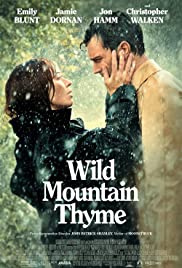 Not suitable under 12; parental guidance to 14 (themes, language, sexual references)

Rosemary Muldoon (Emily Blunt) is head over heels in love with her neighbour, Anthony Reilly (Jamie Dornan), and has been since they were children. Despite Rosemary’s obvious affection, Anthony remains clueless as to how she feels for him. Things get even more complicated when Anthony’s ailing father (Christopher Walken) toys with the idea of selling his farm to his American nephew Adam (John Hamm), instead of passing it onto his own son. When Adam visits Ireland he is captivated by Rosemary, who is unlike any woman he has ever met, is unimpressed by cars or money and is determined to follow her heart despite the fact that it leads to man who barely knows that she exists. It isn’t until Adam expresses his interest in Rosemary that Anthony finally begins to see what is before him and all that he stands to lose. Unable to fight for what he wants, it is Rosemary who must make him see the possibility of a future, help him share his darkest fears and show him that he is so much more than what he believes himself to be.

Wild Mountain Thyme is a romantic drama based on a play called Outside Mullingar by John Patrick Shanley. While the cinematography showcases the beauty of rural Ireland the dialogue sometimes comes across as stilted and strange. The film is best suited to older teen and adult audiences.

The main messages from this movie are to fight for what you want and to never give up on destiny and what you know in your heart to be true.