Wild Parrots of Telegraph Hill, The 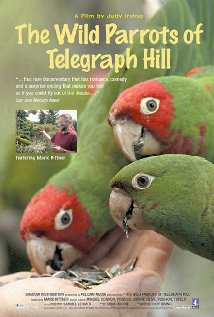 Not recommended under 8, PG to 13 (Distressing scenes)

The Wild Parrots of Telegraph Hill is a documentary based upon the life and work of Mark Bittner, a “Bohemian St. Francis” who over the course of a number of years develops an unprecedented relationship with a flock of wild, South American parrots living in San Francisco.

A former street musician, Mark spent a number of years living in store rooms, basements and even on hotel roofs searching for his true calling and for meaning in his life. While living in a tiny shack on Telegraph Hill Mark begins to feed a small flock of parrots living nearby. Over the course of the next three years he learns to identify more than thirty birds, their habits and personalities, cares for them, befriends them and studies and documents a community of parrots, in a way that no one has done before.

Throughout the documentary we are introduced to individual members of the flock, such as cool and quiet Conner, who always befriends the outcasts and defends the injured and sick; the crippled bird Tupula whom Mark tries to save; and Mingus, the mover and shaker, who would rather stay inside with Mark and dance to guitar music than fly free with the flock.

What began with a handful of seeds, becomes Mark’s life work and true calling, through the Parrots he learns to better understand himself and society and in the process finds inner peace and true happiness.

The only violence in the film was perpetrated by birds towards birds, however, it was at times very graphic.

In addition to the above-mentioned scenes, the following scenes could be distressing for children under the age of five:

Children in this age group may also be distressed by the above-mentioned scenes.

Some children between the ages of eight and thirteen could be distressed by the above mentioned scenes.

While there is nothing in this film that would frighten children over the age of 13, sensitive adolescents could still be upset by some of the scenes described above.

The movie’s main message is that all life is one whole, that we are all interconnected, and that animals are like humans, in that they have thoughts, feelings and individual personalities, we need only take the time to see it.