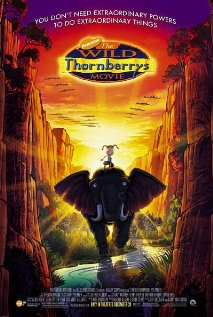 Not recommended under 5, PG to 12 (Viol. Distress. Scenes)

Eliza Thornberry and her family travel around the world in order for her parents to make unique nature documentaries. While in Africa Eliza rescues a wild warthog from a trap; the warthog turns out to be the magical shaman Mnyambo who grants Eliza the power to talk to animals. It is through this power that she communicates with the many different creatures that she sees. One night on the savannah a baby cheetah cub is taken by poachers and Eliza herself is nearly killed. Eliza sets off to find the poachers and in her search uncovers an even bigger plot to kill thousands of elephants during a rare solar eclipse. Having lost her power to speak to the animals Eliza manages to work miracles, by using her previous knowledge, her intuition and her heart in order to save the cheetah cub, her family and a thousand stampeding elephants from certain death.

This film contains a fair amount of violence.

Most of the violent scenes in this movie, as they show violence being perpetuated on helpless animals and or young children, would be potentially frightening for children under five:

Children in this age group may also be frightened by the above-mentioned scenes.

Depending on their age and maturity most children between the ages of eight to thirteen would be able to handle the material contained in this film. There are a number of scenes which parents may wish to discuss with their children in order to reassure them and to help them understand, most notably the scene in which the rhino is dying and the scene in which Tally is abducted.

There is nothing in this film that would be overly disturbing to an early adolescent.

This film contains no sexual references.

There is no human nudity. However bare baboon butts do make a number of appearances.

There is no use of drugs or alcohol in this film.

The film contains no coarse language. However there are a few instances of name-calling. Debbie continually refers to Eliza as “my brat sister.” On one occasion Debbie explains how Eliza “talks like a monkey and dresses like a geek.”

The overall message from this movie is that everyone has special gifts and a special destiny, that you don’t need magical powers to effect change. As Eliza demonstrated in the end, the will to make a difference can, in itself, create miracles. It is about demonstrating courage and bravery to overcome obstacles no matter how impossible they may seem. Finally it is about the struggle of the animal to exist in man’s world and the importance of compassion and understanding to help stop the injustices that they currently suffer.

Some values that parents may wish to encourage are: bravery, helpfulness, determination, tolerance of differences and compassion for animals.

Some values that parents may wish to discourage are: deceitfulness, hypocrisy, violence as a way to solve problems and greed.