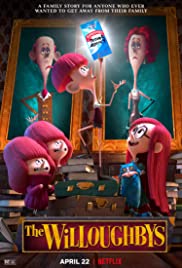 Not suitable under 8; parental guidance to 12 (disturbing themes, animated violence, some scary scenes, and crude humour)

The Willoughbys are a dysfunctional family of four children, Tim (voice of Will Forte), Jane (Alessia Cara) and twins Barnaby A and B (voice of Sean Cullen), who suffer under their horribly selfish parents, Mother (voice of Jane Krakowski) and Father (voice of Martin Short). Mr and Mrs Willoughby are so much in love and absorbed by each other, that they don't have any love or time left for their children and "their childish needs". Tim learns from an early age not to seek love from his Mother but to find it elsewhere. The children are neglected and punished for trivial matters and Tim often ends up in the coal bin. Fed up with being neglected, maltreated, and starved for love as well as food, the young Willoughbys hatch a plan to rid themselves of their self-centred parents and become orphans. The plan is to create a travel brochure to lure their parents away to foreign places, however, the travel plan is full of deadly traps, devised with the hope the parents will never return.

Things do not turn out exactly as planned when the children realise that their parents found a Nanny for them before they left. Nanny (voice of Maya Rudolph) was the cheapest the parents could find but she turns out to be really nice. Before discovering this, however, Tim advises Children's Services that they have a bad nanny. The children are separated and taken into care. Tim now has to devise a new plan to get his parents back so the children can be together again. The plan has a major flaw though; obliviously escaping every single death trap, their parents are planning to sell the family home to finance more adventures and Tim does not know if their parents will even want to take them back.

There is a lot of slapstick violence in this movie including:

Based on Lois Lowry's novel with the same title, The Willoughbys is a very dark animated comedy. It is narrated by a cat (Ricky Gervais) and is fast paced. Some crude jokes and comments are clearly aimed at adults rather than at children. There are some positive messages to be drawn and the movie’s slapstick humour gives it a light appearance but its themes are dark and disturbing. Therefore, it is not suitable for children under 8 and parental guidance is recommended for children aged 8 – 12 years to make sure the movie is not taken literally, and to help these older children understand the dark humour and exaggeration. Best suited to teens and above.

The main messages from this movie are that despite adversity the human spirit can remain strong, smart, resilient, hopeful and creative; everyone needs and deserves love; and that it is important to keep an open mind and heart.