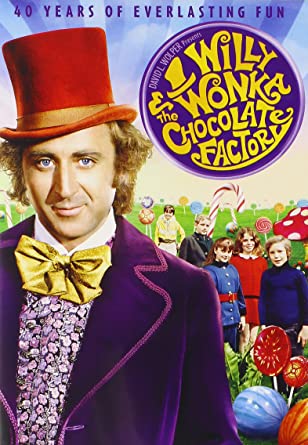 Not suitable under 5; parental guidance to 7 (scary scenes)

Charlie (Peter Ostrum) is a modest, caring, and hard-working boy, who spends his free time outside of school, working as a paperboy to support his impoverished family. Every day Charlie walks past Willy Wonka's (Gene Wilder) famous Chocolate Factory that produces the world's best candy. In order to protect his recipes, Wonka has not allowed anyone inside the factory for years. Unsurprisingly, Charlie and children all around the whole world get excited when Wonka announces that he has hidden five golden tickets in his chocolate bars, and those five children who find a ticket are invited on a tour inside the factory plus a life-long supply of chocolate. Amazingly, Charlie finds one of the golden tickets, and chooses his grandfather Joe (Jack Albertson) to come along. Inside the factory, eccentric Willy Wonka not only shows his guests how his famous candy is made, but also teaches them some lessons about the importance of being modest, honest, and caring.

Honesty; Modesty; What goes around comes around; Creativity; and Imagination.

Nearly 50 years after its first release, Willy Wonka and the Chocolate Factory, a musical fantasy film, is undoubtedly a classic that still has the ingredients to entertain and amuse a family audience. Even though the sets and drops are somewhat dated according to today's standard, they are so creative and packed with attention to detail that they still impress, and the movie's messages are as current and important as ever. Parental guidance for a young audience is warranted due to a couple of scenes that are bit creepy and scary and not suitable for children under 5.

The main messages from this movie are that being kind, modest, and honest will go a long way, and that the consequences of nasty, greedy, and cheeky behaviour will eventually catch up with you.