Win a Date with Tad Hamilton 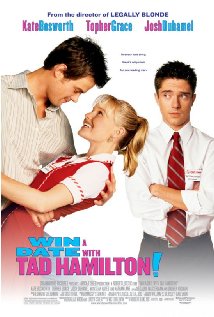 Tad Hamilton is a gorgeous movie star adored by teenage girls everywhere. However his reputation is becoming tarnished and has been seen “drinking, driving, leering, smoking and groping all at the same time”. His management feel this won’t do his career any good and so set out to reinvent his image by putting on a competition to ‘win a date with Tad Hamilton’ with all proceeds going to charity. They choose a hometown country girl from West Virginia, Rosalee, who works at the local Piggly Wiggly supermarket. Rosalee is naturally over the moon and heads off to California leaving behind Pete, the supermarket manager who, unbeknownst to Rosalee, is deeply in love with her. Pete gives her all sorts of advice on how to guard her “carnal treasure”.

On the date, Rosalee says and does everything wrong but Tad is quite impressed by her honesty and unpretentiousness. During the course of the evening Tad realises that despite his wealth and fame, his life is really quite empty and meaningless. When Rosalee doesn’t jump at the chance to get into bed with him, he decides to follow her to West Virginia intending to start a new life. At first Tad just wants a platonic relationship with Rosalee but of coarse ends up falling in love with her. However it doesn’t take Rosalee long to realise that despite his good looks and charm, Tad is a very shallow person, whose lines all come from movies he’s been in.

When Tad is given the movie part he has been desperately wanting he immediately drops his new life to return to California. He wants Rosalee to come with him and this is a decision she has to make with the realisation that Pete also loves her.

There is not really any violence in this movie except in one scene when Pete is watching TV and a soldier is shown dead and bloody.

There are quite a few sexual references:

There is no nudity but plenty of scantily clad women and a little sexual activity:

There is some coarse language including the following:

The theme of this movie is that what is on the inside of a person is more important than what’s on the outside.