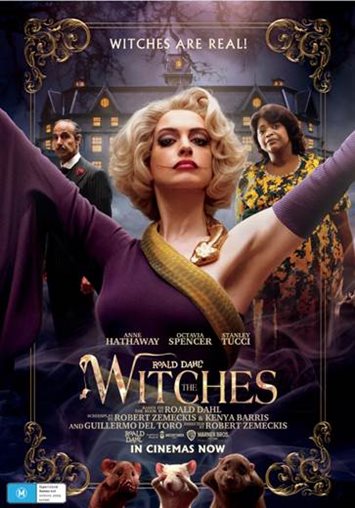 Not suitable under 13; parental guidance to 15 (scary scenes, themes and violence)

Based on Roald Dahl's book, this 2020 adaptation of The Witches is set in Alabama, USA. The main character (identified as ‘Hero Boy’) (Jahzir Bruno) is 8 years old when his parents are killed in a car crash. His Grandma (Octavia Spencer) takes him in and looks after him. One day, when they are out shopping, ‘Hero Boy’ is scared by a strange woman. When he tells his Grandma what he saw, she explains the woman was a witch and goes on to describe witches. She tells him that witches wear wigs to cover their bald heads, gloves to cover their clawed hands and shoes to hide their toeless feet. She also tells him that witches hate all children and want to get rid of all of them.

Grandma decides to take ‘Hero Boy’ to a luxury resort to escape from his ordeal. Instead, the boy finds himself at a convention of witches masquerading as the Society for the Prevention of Cruelty to Children. The witches are commanded by the Grand High Witch (Anne Hathaway) who has devised a potion that will transform children into mice, and she proceeds to demonstrate on a hapless boy called Bruno (Codie-Lee Eastick). Bruno changes into a mouse in front of ‘Hero Boy's’ eyes, and, in a shocked state, he is also caught by the Grand High Witch and changed into a mouse. It is now up to ‘Hero Boy’ and Bruno, and his pet mouse Daisy (voice of Kristen Chenoweth), to defeat the witches in their dastardly plan.

The Witches (2020) is a black comedy but this version is more like a horror movie. The Grand High Witch is very frightening and much scarier than previous versions. The movie shows characters with deformed hands and feet which is quite insensitive to people who might suffer with these disabilities. The book was written as a children's story but this movie is more targeted at teens and adults. It is therefore not recommended for children under 13 and parental guidance is recommended for children aged 13 – 15.

The main messages from this movie are that good overcomes evil and that we are stronger as a team than individually.