Wizard of Oz, The 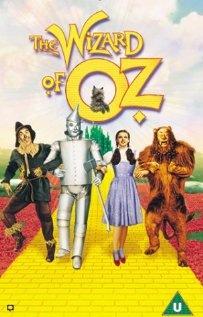 Not recommended under 5, PG to 8 (Violence, Scary scenes)

Dorothy (Judy Garland) is a young girl who lives with her Aunt and Uncle on a farm in Kansas. A nasty neighbour, Miss Gulch (Margaret Hamilton) threatens to have Dorothy’s dog Toto put down because he bit her. This upsets Dorothy so much she decides to run away with Toto. On the way she meets Professor Marvel (Frank Morgan) who convinces her to return home to her Aunt who is worried sick about her. As she nears home a tornado approaches and Dorothy just manages to get indoors but is knocked out by flying debris.

Dorothy is taken up into the skies inside her home and arrives at the magical land of Oz. There she meets Glinda (Billie Burke) the good witch who tells her she must travel to Emerald City to find the Wizard of Oz who will help her to find her way home. Glinda gives Dorothy a magic pair of ruby slippers to protect her from the Wicked Witch of the West and she sets off down the yellow brick road to find the wizard. Along the way she meets a scarecrow who doesn’t have a brain, a tin man who doesn’t have a heart and a lion who doesn’t have any courage. The four of them go to find the Wizard to help them with all their needs but discover along the way that they already had what they were looking for.

The Wizard of Oz is a musical adventure that will appeal to older children. Some of the content is quite scary and is likely to frighten young children.

The main messages from this movie are to face your fears, overcome challenges and realising that what you seek is often already inside you.