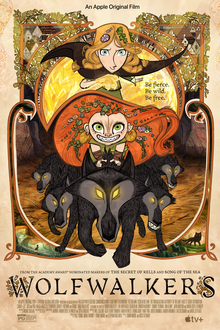 Not suitable under 7; parental guidance to 8 (scary scenes, violence)

Set in 1650 in Kilkenny, Ireland, Wolfwalkers tells the story of a young girl, Robyn (voice of Honor Kneasfey), who moves from England to Ireland with her father, Bill Goodfellowe (Sean Bean). Robyn is disliked by the local children and villagers who are under the rule of the authoritarian, Lord Protector (Simon McBurney), and who are kept in the town by a large wall. The wall has been erected to keep the villagers safe from the wolves that are attacking the farmers’ sheep and crops. The farmland has continually encroached further into the forests, the wolves’ traditional home, and Bill’s job is to rid the forests of the wolves.

One day, while out looking for her pet falcon, Merlyn, Robyn meets Mehb (Eva Whittaker), a free-spirited wild child. Robyn soon discovers that Mehb is a wolfwalker, a person who turns into a wolf while asleep, and who has special healing powers. Mehb is waiting for her mother to return and Robyn is determined to help her find her. To do so, Robyn defies her father who has forbidden her to go outside of the walls. This leads to wonderful, new discoveries for Robyn and eventually also her father, who comes to find her, turning the hunter into the hunted.

Wolfwalkers is an animated movie that blends history and Irish mythology into a moving story about the fate of animals at the hands of humans. The contrast between the strict, rigid rule of law and the free-spirited course of nature is very evident. Likely to be enjoyed by families with children aged 9 and above. As the movie is quite intense and scary, it is unsuitable for young children under 7 and parental guidance is recommended for 7 – 8 year olds.

The main messages from this movie are to look after our environment and to care for the creatures that live in it.