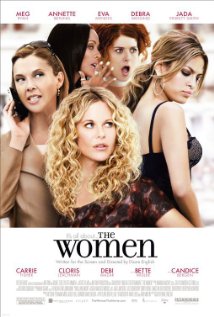 Not recommended under 13, PG to 15 due to sexual and drug references and coarse language.

Mary (Meg Ryan), Sylvie (Annette Benning), Edie (Debra Messing) and Alex (Jada Pinkett Smith) are best friends living in New York. Mary has been happily married for 13 years to a Wall Street financier and has a daughter, Molly (India Ennega), verging on her teenage years. Mary is caught up in the socialite world of charity events, having given up her aspirations to design for the sake of her husband’s career. Her seemingly perfect world falls apart around her when she discovers her husband is having an affair with the much younger Crystal (Eva Mendes), who works behind the perfume counter at Saks. Mary’s friends, mother (Candice Bergen) and staff (Cloris Leachman and Tilly Scott Pedersen) try to offer their support, advice and love to Mary with mixed results.
In the meantime Mary’s friends have their own problems to deal with. Sylvie is struggling to keep her job at a high fashion magazine and is blackmailed by a gossip columnist (Carrie Fischer) to betray her friendship to Mary in one final sacrifice for her career. Complicating this relationship further is Sylvie’s discovery that all is not well for Molly who is struggling with her parent’s separation, her own body image issues and burgeoning choices of adolescence. Sylvie becomes Molly’s confidant unbeknownst to Mary.

Edie discovers she is pregnant for the fifth time and is hoping for a boy. She has her own relationship history and secrets that she hopes Mary won’t discover. Alex is struggling to write a follow up to her first successful novel and manage the moods of her new supermodel girlfriend.

The Women is a light-hearted comedy about the friendship between four well-to-do New Yorkers, and the struggles and choices of the modern day woman. Younger children may find the content and dialogue of the movie uninteresting, but older girls may enjoy the fashion and settings of the movie and may relate to the plight of the ‘tweenie’ character.
Values in this movie that parents may wish to reinforce with their children include: