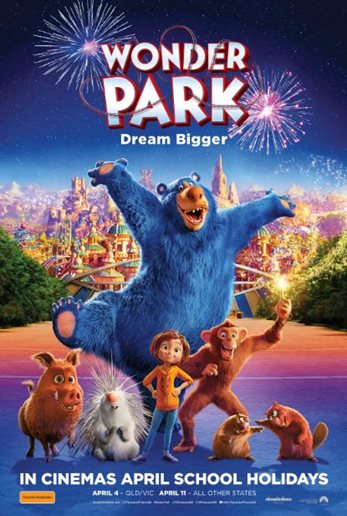 Not recommended under 6; Parental guidance to 8 (Scary scenes, themes).

June (voice of Sofia Mali) and her mother (Jennifer Garner) are very close and love to create magical worlds together. In particular they create Wonderland, a wonderful fantasy theme park, which includes several of June’s toys: Peanut, a monkey (Norbert Leo Butz), Boomer, a bear (Ken Hudson Campbell), Greta, a warthog (Mila Kunis) and Steve, a porcupine (John Oliver). One day June’s mother gets bad news and she must tell June that she is sick and has to go away for some time. June’s world collapses and she loses interest in her friends and in Wonderland. Time goes by and June is now older (Brianna Denski) and is overly worried about her Dad. June’s Dad decides to send her to camp 'Awe Sum' to try and lift her out of her sadness, but June panics along the way and tries to return home. On the way however, she gets side-tracked and discovers an old broken-down fun park. There she finds life size characters of her old friends, Boomer, Greta and Steve. They tell her the sad story about how a darkness had descended on Wonder Park and it had been overrun by the chimpanzombies. June realises that she must find her old friend Peanut and together restore light to the lost park.

Separation from a parent; family illness; dealing with emotions; fantasy; animals and children in peril.

Boomer goes backwards on the roller coaster. It isn’t fixed and it seems like he will go off the edge. He’s terrified and screams but the animals fix it just in time.

Wonder Park is a colourful and exciting animated adventure/fantasy story.  There are elements of sadness, although it does have a happy ending. There are some intense moments, threats, and mild violence; therefore, not recommended for under 6’s. Parental Guidance is recommended for children between 6 and 8.

The main messages from this movie are that light is stronger than darkness and that darkness is always present to remind us of the light that surrounds us.