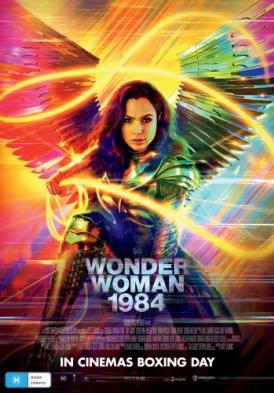 Not suitable under 12; parental guidance to 14 (violence and scary scenes)

Wonder Woman 1984 begins several decades after the original movie and finds Diana Prince/Wonder Woman (Gal Gadot) working as a curator in the Smithsonian's National Museum of Natural History. When a new colleague starts work as a gemologist, a shy Dr Barbara Minerva (Kristen Wiig), she is immediately asked by the FBI to look into the origins of a stolen artefact, a citrine rock embedded in a base engraved with Latin words that say that those who hold it should make a wish. Diana jokingly asks for her departed partner Steve (Chris Pine) to come back, and Barbara wishes she could be much more like Diana, smarter, stronger and sexier. They soon discover that the rock does indeed grant their wishes when Diana meets a man whose body has been inhabited by Steve. Barbara also transforms into a much stronger and more attractive woman, and later into the villain Cheetah. However, the greater villain is a failed businessman, Max Lord (Pedro Pascal), who charms Barbara and steals the rock.

Now in possession of the powerful rock, Lord is determined on becoming the most powerful man in the world. He grants everyone their greatest wish, which sees the world descend into chaos. Emir Said Bin Abydos (Amr Waked) wishes for his ancestral lands to be returned, subsequently a wall instantly appears and many people are displaced. Riots on the streets of America with burning and looting become common and many people are homeless. There is a threat of nuclear war with the Russians and missiles are let loose. Wonder Woman has a big task ahead of her to save the planet from destruction.

There is also a lot of violence in this movie, which is very stylised and unrealistic, including:

Wonder Woman 1984 is an action movie based on the DC Wonder Woman character. It is fast paced and quite intense at times. Wonder Woman is a brave and selfless female character who doesn't like the use of guns, preferring her golden lasso She is also powerful but kind and empathetic, making her a good female role model albeit somewhat unrealistic. However, due to the content, the movie is not suitable for children under 12 and parental guidance is recommended for children to 15.

The main messages from this movie are that the greater good should override personal desire and that redemption is always possible.