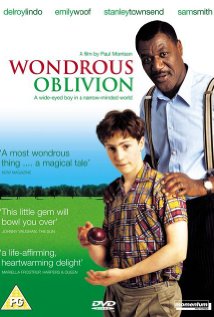 David Wiseman is an eleven year old Jewish boy growing up in London during the 1960s. David is a keen cricket fan who collects cricket cards and knows all about the players but unfortunately can’t throw or hit a ball himself. His school mates make fun of this and although David longs to make the school team and play for the coveted cup, he usually gets left to be the scorer.

David lives in a very narrow minded community who barely tolerate a Jewish family living amongst them but when a black family, the Samuels, move in next door to the Wisemans, it’s more than they are prepared to take. The Samuels family consists of Father, Mother and two daughters. They make quite a noise moving in, especially when they throw a party and play loud music which keeps the neighbours awake. Also much to the horror of the neighbours, Dennis Samuels proceeds to dig up the roses in the back garden and erects a net the width and length of the garden (which isn’t very large).

David watches with longing while Dennis and his daughter Judy play cricket in their back garden. Before too long and against his parents’ wishes, David joins the Samuels to practise some cricket. Dennis soon realises that David doesn’t have any skill and with patience and kindness he teaches him to bat and throw a ball. David’s mother Ruth is pleased for him that he has found new friends and now allows him to go just into their back garden. David becomes firm friends with Dennis and particularly Judy. Ruth also admires Dennis for the way he treats David.

The tension in the neighbourhood increases and threats are made to both families but when the Samuels’ house is set on fire one night, things become very ugly.

Children in this age group could be scared by the above mentioned violent scenes and in particular by the house being set on fire. David wakes Judy up by breaking her window and calling out to her. The family all have to get out of the house. When the police arrive they accuse Dennis of setting the house on fire himself and so he goes back into the house to retrieve the hate mail he’s been receiving. However he is in the house for a long time and Mr. Wiseman has to go in and fetch him out.

Children in this age group could also be scared by the above mentioned scenes.

Children in this age group could still be concerned by the above mentioned scenes and by the hatred expressed in the movie.

Children in this age group wouldn’t be scared by this movie.

There’s not really any sexual activity except that Ruth and Dennis kiss passionately but don’t go any further because Dennis feels it is wrong.

There’s a bit of drinking and smoking in this movie—in the cricket club, at a dance and at home. When David starts hitting the ball, his friends say he must be ‘on drugs’.

There is a little coarse language in this movie with the occasional use of the following:

The take home message of this movie is the senseless pain and violence caused by racial intolerance.