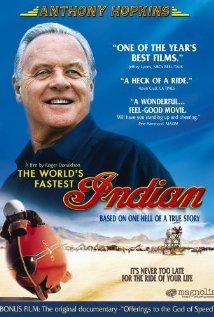 Despite his age(late sixties), and having already set the land speed record on his Indian Twin Scout motorcycle in New Zealand and Australia, the slightly eccentric but charming Burt Munro (Anthony Hopkins) still pursues his dream of breaking the world land speed record. From his dilapidated garage in Invercargill, New Zealand, and with the help of his young neighbour, Tommy Jackson (Aaron Murphy), Burt continues to modify his motorbike and raise the necessary funds to get to the 1967 Bonneville Salt Flats Speedmeet in Utah, USA.

After making some personal sacrifices and ignoring his increasing health problems, Burt is able to begin his own odyssey to Los Angeles and cross country to Utah. He befriends and charms an assortment of characters on his journey, but remains single-minded in his purpose to race. After finally reaching Bonneville, a series of unexpected obstacles appear, and Burt’s dream of 25 years to race for the world record seems lost. Burt relies on his determination, charm and the support of newfound friends to overcome these final hurdles.

There are no significant violent scenes in this film. There is one scene in which two angry drivers in Los Angeles, honk at each other and then deliberately drive back and forth into each other. No one is shown to be injured.

There are some scenes that could concern children under the age of five, including:

Children in this age group could also be concerned by the above-mentioned scenes.

Many children aged eight to thirteen could also be concerned by the above mentioned scenes.

Children over the age of thirteen will probably be okay with this movie, although the scene in the final race could concern some children.

Except for the Indian Twin Scout motorbike, there is no product placement in this movie.

The film contains some sexual references, including:

There is some implied sexual activity, including:

There are a number of scenes in which people are shown to be drinking or smoking. Burt clearly states on many occasions that smoking is bad for you and that he himself never smokes or drinks. He is shown to be well-liked despite taking a strong stand on this.

The film contains frequent coarse language, particularly in the latter half, including:

The main messages of this more at to not be afraid of taking risks, that age is no barrier to chasing your dreams and to be determined in the face of obstacles and people who try to put you down.

This movie could give parents the opportunity to discuss with their children the selfishness that can go hand in hand with being single minded. The issue of racing without appropriate safety equipment (due to a lack of funds) could also be discussed.