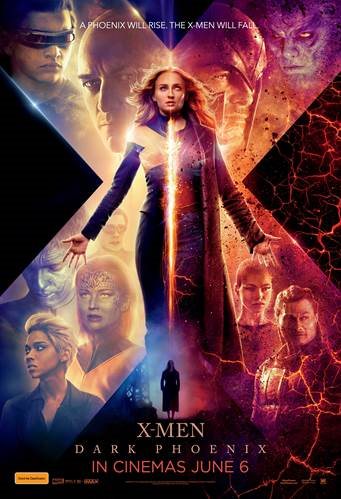 In the 1970s, Charles Xavier (James McAvoy) – head of an academy for mutant children – takes in Jean Grey (Sophie Turner), after her supernatural powers accidentally cause their car to crash, killing her parents.  After several years at the academy, Jean becomes a central member of the X-Men; a group of mutants who help protect the world and save the day when no one else can.  When a mission goes wrong, and Jean is filled with a mysterious extra-terrestrial substance, she begins to develop incredible powers that she struggles to control.  As her powers continue to grow, Jean starts to hurt those around her, both unintentionally and deliberately. The X-Men – Mystique (Jennifer Lawrence), Beast (Nicholas Hoult), Cyclops (Tye Sheridan), Quicksilver (Evan Peters), Storm (Alexandra Shipp), Nightcrawler (Kodi Smit-McPhee), Magneto (Michael Fassbender), and Professor X – must work together to stop Jean, and the alien Vuk (Jessica Chastain), who has come to destroy her and take the supernatural powers for her own bidding.

X-Men: Dark Phoenix is the fourth film in the X-Men prequal franchise. While generally well shot, this film is often quite violent and repetitive in plot. While the continuity disruptions in this film were pre-empted by the two previous films in the series, it is likely that some of the events in X-Men: Dark Phoenix will confuse viewers familiar with the original films.This film is not suitable for children under 13 due to moderate impact violence, coarse language, and supernatural and mature themes.