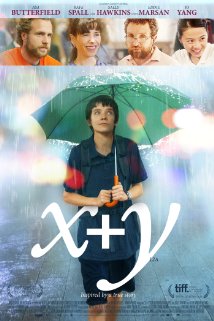 Not recommended under 13; parental guidance recommended 13-15 due to disturbing scenes and themes, and coarse language.

Nine-year-old Nathan Ellis (Edward Baker-Close) is assessed as being on the Autism Spectrum. He is sensitive, detached and a maths prodigy, fixated on complex mathematical patterns. Nathan avoids touch and finds it challenging to interact socially. The only person that he connects with is his father Michael (Martin McCann) and when Nathan witnesses his father’s death in a car accident, he is traumatised and becomes more introverted.

Nathan is bought up by his devoted, but at times exasperated, mother Julie (Sally Hawkins). Realising she is not able to help Nathan to develop his mathematical mind, Julie takes Nathan out of primary school and enlists him in the local high school where he is befriended by maths teacher Mr Humphreys (Rafe Spall).

Several years later we find Nathan (Asa Butterfield), now 15, competing to gain a position on the UK team for the International Mathematics Olympiad. Nathan wins his place and manages to form a somewhat awkward relationship with several other competitors including Isaac (Alex Lawther), Rebecca (Alexa Davies) and Luke (Jake Davies).

The UK team travel to Taiwan to take part in an international maths camp and here Nathan strikes up an unexpected friendship with Chinese competitor Zhang Mei (Jo Yang), who is able to entice Nathan out of his protective shell.

The film contains a fatal car crash, self-harm, and verbal violence. Examples include:

X + Y, a drama about a schoolboy maths prodigy with Autism, was inspired by the 2007 documentary Beautiful Young Minds.  It is best suited to adolescents and adults. There are disturbing scenes and themes, and coarse language, which make it unsuitable for children under 13. Themes include the death of a parent in a car crash, Autism Spectrum Disorder, self-harm and Multiple Sclerosis. Parental guidance is recommended for the 13-15 age group.

Parents may wish to talk to their children about the social and behavioural difficulties faced by young people on the Autism Spectrum.